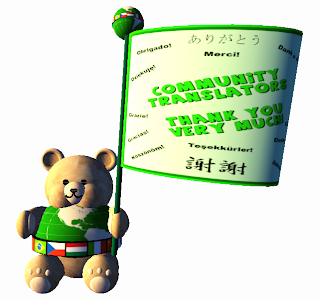 Translators know how to party!

I think we can safely say that Friday April 24th was a Community Translator Day in Second Life!

We told you in March about the amazing contributions to Second Life by our international Resident localizers. Well, today, at the Community Translators’ Appreciation Party on the magical Eventopia Island, we realized that our community translators and localizers like to party together just as much as collaborate closely on numerous localization tasks.

It was a pleasure to see our hard working translator-community with members from Argentina, Brazil, Canada, China, Denmark, Germany, France, Hungary, Italy, Japan, Korea, Mexico, Netherlands, Poland, Portugal, Russia, Switzerland, Turkey, Ukraine and many other countries and time zones dance together, explore the island together, fish the Translation Fish, hunt for translator apples, ride up and down the vortex tree, relax and have fun together.

Lindens from around the world also joined in the festivities. Judy, M and Philip’s visits were, of course a big hit.

Even the party timing was perfect: we just started the first localization cycle of the new viewer version (1.23) in 15 languages. We (community translators and Lindens alike) are very excited that our new viewer version will be the best localized viewer yet and in more languages than ever!

Not only are our Residents helping us add 5 brand new languages (Italian, Dutch, Turkish, Russian, Ukrainian) based on collaboratively developed SL glossaries, but they are also instrumental in the complete revamp of Spanish, Chinese, and Portuguese viewers as well as in updating of Danish, Polish, Hungarian, German, Japanese and French.

We are yet to see the limit to what our translators can do. Just this week, our CT Project members helped us translate a blog into Spanish, add some 10 more KBs for French and Japanese, update XStreet translations for Brazilian Portuguese, and contributed some spectacular images for Japanese and German homepages (I can’t wait to see these images live next week: wow!).

Again and to all of our brilliant translators: thank you for your contributions and for making Second Life even better for our community worldwide.

P.S. And a message from M Linden at the party:

A big party was held yesterday in Eventopia, a beautiful Linden Lab Land, in honour of the big group of people who helped the translation of the viewer in a lot of languages. The Party was organized by Lexie Linden and Danica Linden and all the localization crew of Linden Lab. We had a smashing Dj who even accepted song requests. The land was fabulous, like a fairy tale picture.We had the pleasure to have also a friendly greeting with Philip Linden (creator and founder of SL, President) and M Linden (CEO of LL), who personally thanked all the crew for the job done.
Thanks to Sergen davies for high resolution pictures contribution :)